Every puppy
needs a snow day!
(Special thanks to Farley and Jazzi!) 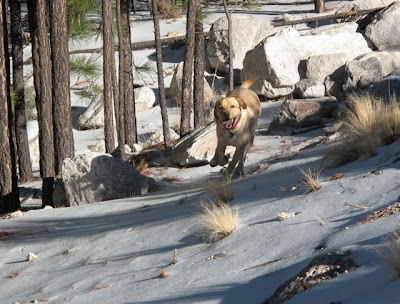 The tall guy was telling me that when he was the little guy, every now and again he would get what he called a 'snow day'. That was when it snowed and he didn't have to go to school. The best was when his mom woke him up and told him there would be no school and he got to stay in his warm bed and go back to sleep.

So that got me to thinking. I think that puppies and dogs (and even cats and horses too) need a snow day. Even if you don't have any snow. So, I would like everyone to pick one day and declare it to be your 'SNOW WAY SNOW DAY!!'. Your mom or dad gets to come wake you up and tell you that you get to sleep in, then you get to get up late and have breakfast and watch cartoons all morning!

The tall guy told me that after they watched cartoons, they would put socks on their hands and go out and play in the snow! I asked him if he was born before they had gloves and he said no, that when he was younger all his gloves just seemed to get lost, so they had to use socks. (He also said they only had 3 channels of teevees to watch, so I don't know how much credence you should lend to his sock-glove story!)

So there you have it. Make sure you get lots of pictures on your snow day so we can see how much fun you are having!

PS - The tall guy just said if you didn't have any snow, you could have a 'Dirt Day! Oh Yea!'. I told him to go back to bed.