I asked the tall guy if he would turn this into a wonderful movie for me and add music and titles and all the neat stuff that he knows how to do.
Do you hear music?

Do you see titles?

I guess I'll just have to learn how to do it myself!

By the way, I was not fighting with the other dog in the video, but I was a bit annoyed as he kept trying to crawl on top of me while I was trying to play soccers.  So, I had to have a discussion with him.

Did I Catch It? 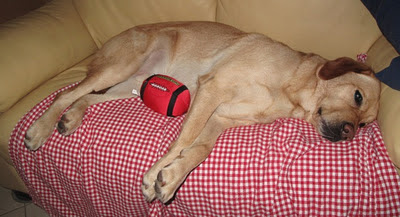 Yes, we can play ball right after I finish this nap.

Naps are very important for growing boys, and I intend to grow really big!  As a matter of fact, if you could just bring me something to eat, I could eat while I sleep.  Wouldn't that be fun?

How about water?  Would you just open my mouth ever now and again and .... what?  No?

Well, I won't even ask about the bathroom thing then.
Posted by JacksDad at 12:05 AM 15 comments: 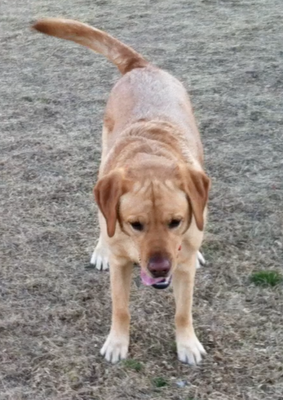 I noticed it when we were out walking yesterday.  The tall guy didn't seem to notice it.  Maybe it was because we were like 3 miles away from it.  But I did.  The tall guy was just trying to get home.  Something about needing a drink of water.  But I persisted.  I started to walk one direction, the tall guy wanted to go the other.  Usually, he wins.  But then I gave him my puppy eyes.  He can't resist when I do the puppy eye thing.  So, he said we would go see what I was so determined to find.  We quickly crossed the street and went up the sidewalk.  The closer we got, the faster I walked.  Time seemed to stand still as we rushed toward our goal.  All of a sudden, there it was! 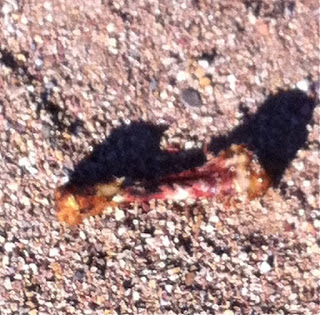 Can you believe that someone threw this out? Just look at it. There's enough meat on there to feed Sassy, Zack, and Buddy AND me.  Why, you could probably feed 200 Miss Mindy's and have enough left over to make Sunday dinner for Remington!

And did I get to eat it?  Eat it?  I didn't even get within 3 feet of it before I was DRAGGED away by my string.  After all the work I put in!!

So, there's my mystery.  Who left this nice chicken bone sitting on the side of the road?  Were they waiting to see if it would get to the other side?

PS.  It is still there today.  And the tall guy STILL won't let me eat it!

PPS.  Just in case you haven't seen this a thousand times yet:

PPPS. And just to tide you over the weekend, something that has nothing whatsoever to do with dogs, although I'm pretty sure there's some chicken bones somewhere in this video (you may want to sit down for this one):

The next voice you hear...

I like playing the soccers, although to tell you the truth, the tall guy isn't very good at it.

But it gets him outside and off the computer, so I do it anyway!

PS.  Please help him remember to turn his phone sideways next time he's making movies so they will look better on here!!  I'm getting tired of being shrunk!
Posted by JacksDad at 12:05 AM 14 comments: 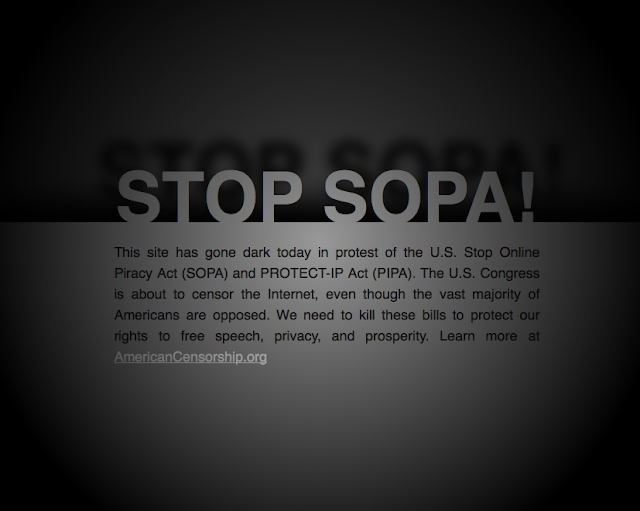 This is a good show! 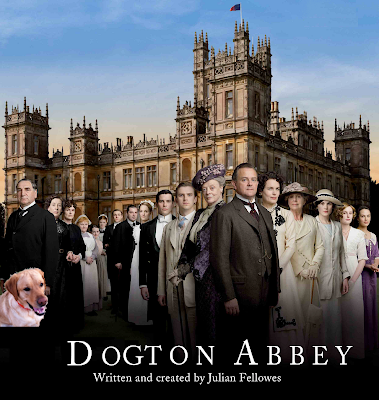 But they should show more of the dog!
PS.  If you watch this show, please do not say anything about
the second season.  The tall guy spent all weekend
watching Season 1 and he has not started watching season two yet!
Posted by JacksDad at 12:05 AM 17 comments:

Well he is finally back home! 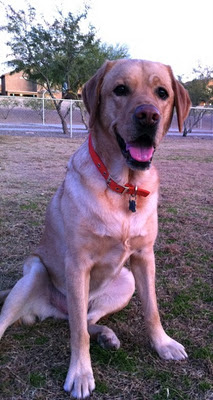 You may have noticed that the tall guy has not been writing on your blogs for the past couple of days.  That is because he was not even here!  He left one day and went somewhere and not only did he not tell me where he was going, he did not even TAKE ME with him!
He just got back home today and he said
he had to fly up in the sky in an aeroplane.
He took this picture to prove to me. 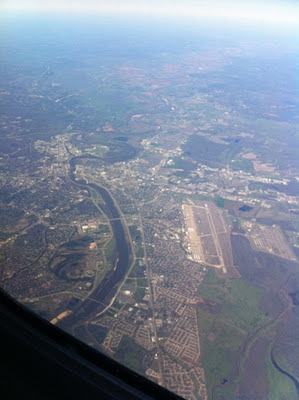 He has no idea where this is.
But it is somewhere up in the sky.
Evidently they do not allow dogs to fly on the aeroplanes.  Besides, he said I would not like it because of all the people turning into sardines.
Once again, I have no idea what he is talking about.
But he is finally home again,
and that is all that matters.
Posted by JacksDad at 12:05 AM 19 comments: 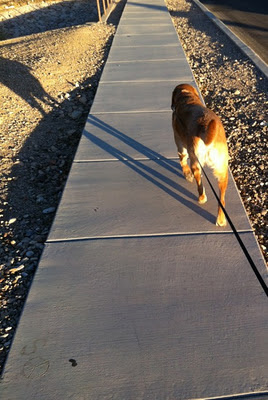 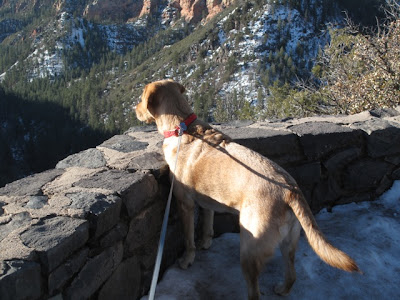 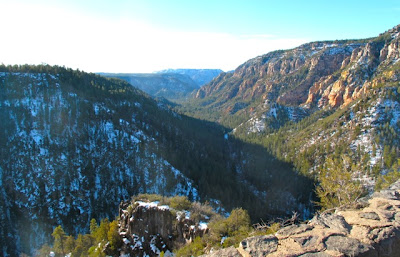 I am just finding out that ED is very important.
Especially if you're trying to say "I'm pooped!"
Just something to think about!
(The picture is on the way to Sedona,
just in case you were wondering about that too!)
Posted by JacksDad at 12:05 AM 16 comments: 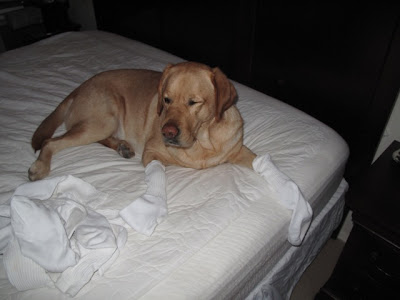 We want to thank everyone for their help for Reecie Cup.
As has been said many many times before,
bloggers are some of the kindest
and bestest peoples in the world.
Tall guys,
on the other hand,
think it's funny to put socks
on where they don't belong.
And they don't even fit!
Posted by JacksDad at 12:05 AM 11 comments:

He always said he was gonna give me
a sock upside the head one day! 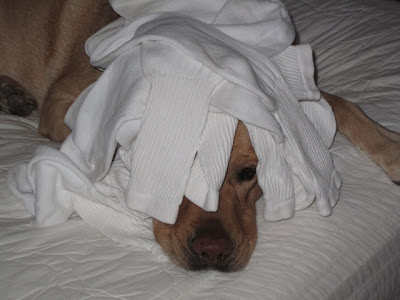 I think the cold has got to his brain.
Well, that and the fact that I'm not
supposed to be on the bed
when he's trying to make it up.
Posted by JacksDad at 12:05 AM 12 comments: 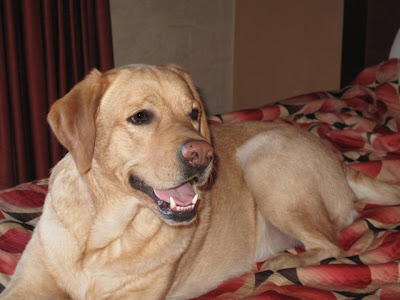 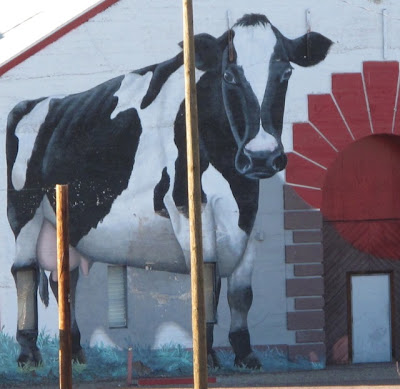 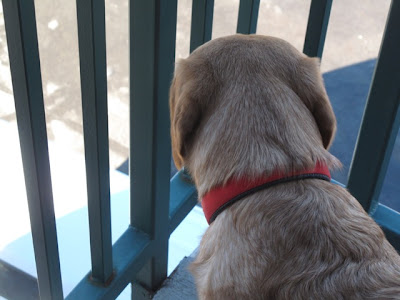 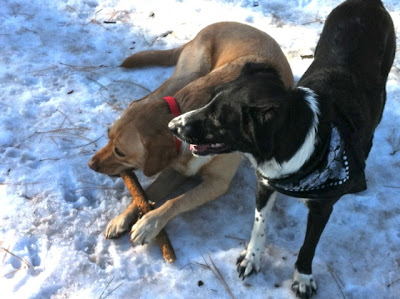 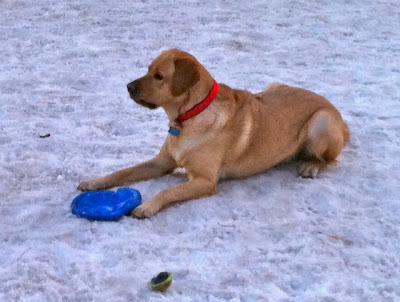