In which we go on the hiking... 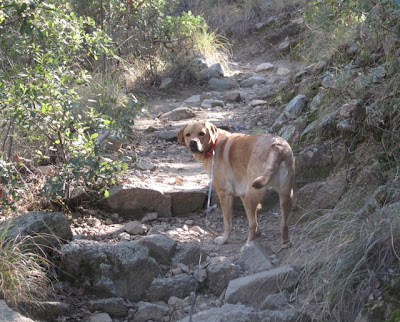 This is my "Would you PLEASE hurry up?" look.
We went on the hiking again down in the mountains, which is not to be confused with up in the mountains, as they are two different sets of mountains.  Unfortunately, someone whose name shall remain TG, decided that we were on the wrong trail, so by the time he realized we weren't going on the trail he wanted to be on, we had almost worn out our hiking muscles.  So, we turned around and went up the right trail, but we didn't go as far as I would have liked.  But we did hike about 920 miles, according to the same guy who shall remain named TG.   Actually, I measured it and it was only about 2.5 miles, but since his legs are longer than mine, maybe it just seemed like 920 miles to him.
Here is where we went:  http://arizona.sierraclub.org/trail_guide/hike20.htm
so if you would like to go with us some time, let us know!  Don't worry, we probably won't make it all the way to the top next time either!!

PS.  I just noticed that we were almost on Jack Mountain!  Isn't that cool?  We'll have to go there so I can get a picture.
I feel like the Waltons! :)
Posted by JacksDad at 12:05 AM