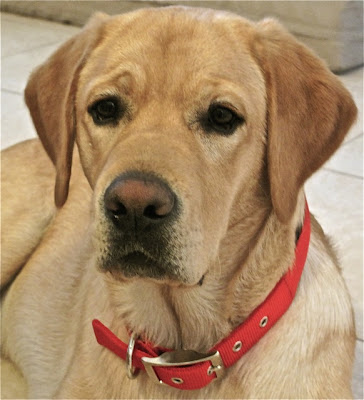 The tall guy said I needed to start wearing a COLLAR, so we went to the pet store and I picked out one that I liked. I chose this one because it has padding that won't rub up against my neck. Also, it has padding that I can eat when the tall guy isn't looking. I tried to get one with the studs all the way around, but the tall guy said he didn't feel like paying the vet bill when I swallowed them. So I chose the reflective red one, in case I decide to go out for a walk late at night. I am six months old this week, so I guess this was my birthday present. I wanted a 70" Sony LCD tv, but the tall guy said maybe for my 1 year birthday.

I just woke up from a nap when the tall guy took this picture. For some reason, he likes to take pictures of me when I first wake up. I keep reminding him how HE looks when he first wakes up, but he just keeps ignoring me.
Posted by JacksDad at 2:01 AM