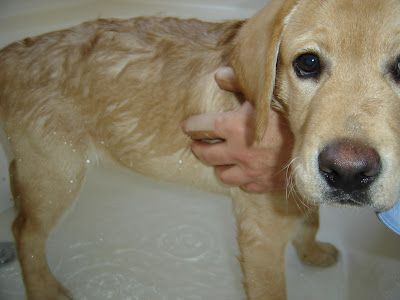 Well, it's not really OUR first bath. That would be disgusting. It's Jack's first bath at his new home and he did really well. He wasn't the least bit worried about going down the drain, but he did have a bit o' trouble standing in the slippery tub. His favorite part was eating the towels as he was dried off, but that worked out well as he got a nice rubbing so he was very content.

Now he smells like fresh baked apple pie (or maybe that's the Christmas candles).
Posted by JacksDad at 3:01 AM