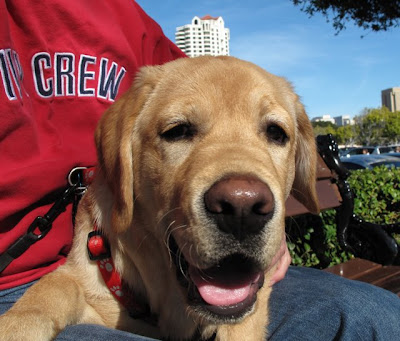 Seaport Village, San Diego
During our trip to Dog Beach, we also went downtown to Seaport Village! I was tired from all the playing on the beach, so I sat on a bench with the tall guy so that everyone could come up to me and tell me how handsome I am. I could get used to living here.

I didn't see many dogs here, but there were a lot of people and there were some really stupid birds who decided they wanted to sit on the water. I tried to bark at them and tell them there was a whole big place just covered with grass, but they didn't listen. I also found out that I am NOT supposed to eat something called a FRENCH FRY covered in ketchup that someone dropped on the ground (the tall guy nearly had a hissy fit when I did that, so I left it for the next puppy who doesn't have such a cranky tall guy). I didn't even know I was OCONUS!

We also some some really big buildings that were floating in the water. I guess they got flooded or something.

PS: Just in case you were wondering, the tall guy always (well, almost always) puts this really great tasting stuff all over my nose before we go out in the sun. He's a very good tall guy sometimes!
Posted by JacksDad at 2:01 AM