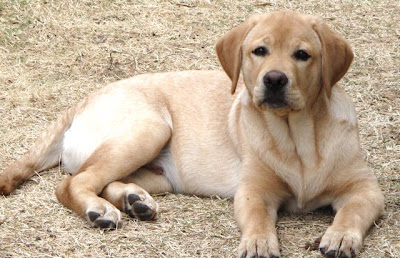 Jack says he can be really handsome when he wants to be. I tell him it's because he had really beautiful parents and it had nothing to do with the fact that he can now jump up on the counter and grab the paper towels. (This picture was taken on his 4 month birthday - I think he was being good so he would get a lot of presents!)

Jack is multi-national: a mix between English and American Lab. If you would like to see his amazing parents, here are their websites:
His Mom Cassie:
http://sundancerlabs.ipower.com/page4.html
(Jack was Mr. Red before he became Jack!)

Both Cassie and Admiral have wonderful families that love them very much!
Posted by JacksDad at 2:01 AM