Do not stick your nose where it doesn't belong! 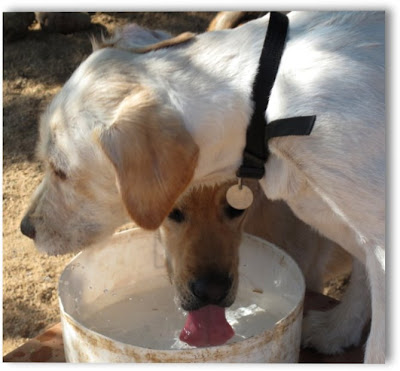 I found out the hard way that some of the older puppies do not like when you stick your nose in their face when they are laying under the picnic table at the puppy park. One of the dogs, who is usually very nice, decided that I was being 'nosy' and actually bit me on the nose. Needless to say, I was not a happy puppy, but the tall guy said that I was ok.

After that fiasco, I found another puppy who wanted to play. His dad said he is a labradoodle (does that make his mother an etch-a-sketch?). That's him in the picture above. He is not trying to hog all the water; it's just the angle that the tall guy took the picture.

When we got home, the tall guy made me some cookies from a recipe that he found at Katie and Louis' bloghouse. I decided they were very good, even if the tall guy did make them himself (he's trying to learn how to be a better cook, so I try to give him all the encouragement I can). I didn't know if I would like salmons, but the tall guy told me that it was a type of fish, and it was pretty good. So if your puppy has been good today, go over to Katie and Louis' blog and make them some salmon cookies. (They are even good if you burn the edges, but don't tell the tall guy I told you about that!)
Posted by JacksDad at 3:01 AM