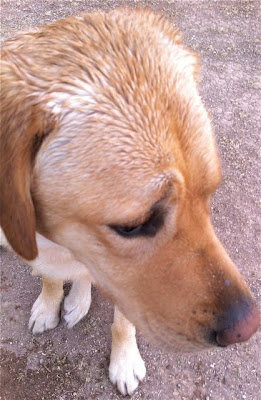 This is what your head will look like if you
stick it in the shower when your peoples are in there!

So, back to our story...
We have breaking glass,
beeping smokey alarms,
vacuum cleaners,
and thunder!

When the smokey alarm went off,
both the tall guy and I woke up and looked at each other.
I didn't know what it was, as I hadn't heard one before.
The tall guy said "Oh well" and then he got up,
so I had to get up and see what he was going to do.
(What he was going to do was
take down the alarm and go back to bed,
because he did not have no 9 volt batteries!)

The tall guy was amazed at how I reacted.
I didn't think it was a big deal.
Evidently, I am the first puppy the tall guy
has ever had who doesn't get bothered by loud noises.
All of his other puppies
(and that is a story that I have to talk to him about)
did NOT like it when the smokey alarms when off.

I'm also the first puppy he has had
who is not afraid of the vacuum cleaner
or the fire engines when they go by at the park.
The tall guy says I have very good hearing,
because I can hear bread being toasted
at 300 yards, but evidently I just got used to
being around noise and since the tall guy
doesn't think it's a big deal,
I guess I just decided it wasn't a big deal either!
As a matter of fact,
I like it when he is using the vacuum cleaner
and I follow him and point out the spots that
he might have missed.
I love watching the fire engines.
(There is a fire station at the big park where we go every day.)
Maybe one day I will get to go ride on one!

So there's the story.
Now we would like to hear how YOU react
when you hear a loud noise.
Or when you get drunk.
Either one will be fine.

(Note from the TG: Jack is right. He is very unusual in that loud noises don't seem to affect him very much. He definitely does not have problems hearing loud noises or soft voices (or food - yes, Jack hears food) but he's the first dog I had that just doesn't seem to be bothered by them. I read about some of the dogs who are very nervous during thunderstorms, but Jack just doesn't want to go out in the rain. The thunder doesn't scare him. He seems to think that the vacuum cleaner is a giant toy and he LOVES watching the fire engines and ambulances when they leave the station house at the park. I don't know what he thinks they are, but he is definitely fascinated by them.