The Case of
The One-Legged Lady
(cont'd) 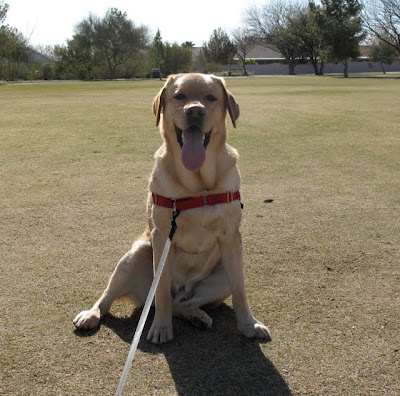 This case has me all tied up in knots!
We've found out some more information about our one-legged friend. The police seem to think her name is Evi. We surmised this from this photograph found at the CSI (Canine Sniffing Investigation) unit: 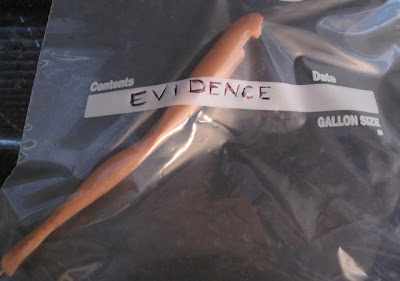 Evidently, Ms. Dence has also been seen traveling from state to state - often with a gentleman by the name of Ken. Here are some of the clues that have been discovered by our cracker-jack team of top-secret hidden informants:

"That dame's leg belongs in NC. I do believe it is the missing Barbie leg that disappeared from our house many years ago. " Top Secret Hidden Informant #1

"I saw the other leg. She must be making herself out west." Top Secret Hidden Informant #2

"I know what happened to the lady whose leg you found. She's in a box in my closet. Her friend, named Ken, is in the same predicament. Only his hands have been chewed off and his one good leg is missing a foot. They both met their fate in the jaws of a vengeful poodle who never got to go on road trips with his family." Top Secret Hidden Informant #3

So here's what we have so far. A very tall one-legged lady has been seen headed west, possibly with a male companion named Ken who does not have a foot or hands. This case is becoming curiouser and curiouser by the minute! The clues are mounting up!

THIS JUST IN: A rather strange group of people has been reportedly seen in the area where the event occurred. We have just received photographs of the group. If you see any of these people, please report to your local authorities. Do not try to apprehend them, as they are pretty much dead and are probably zombies!!!