At the Puppy Park!

I would like for everyone to come visit me and we will go to the puppy park. Now I know some of you puppies live out in the country and you don't have puppy parks because you have lots of places to play right at your house. Well, some puppies (like me) live in the city and we go to the puppy park to play with the other puppies.

Here are some pictures of me and my friend Sunshine at the puppy park! Sunshine has really pretty eyes - one of them is blue and one of them is brown. (I think she wears a contact in one eye because I haven't ever seen a dog with two different color eyes before!) 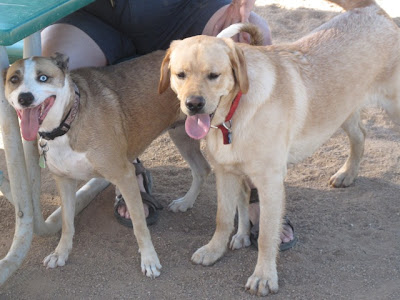 Sunshine's dad gets a little perturbed because he says we are always trying to play under his feet.
There are all sorts of toys at the puppy park for us to play with. Here we are playing 'Jack, that's not your toy.' The tall guy says that is one of my favorite games at the puppy park! 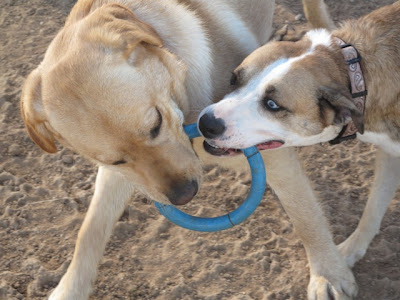 Now we are playing 'Carry the round blue thing from one end of the park to the other'. Sunshine is very good about sharing the toys. The tall guy likes this game because we always drop it really far away from him so he gets lots of exercise going to pick it up. 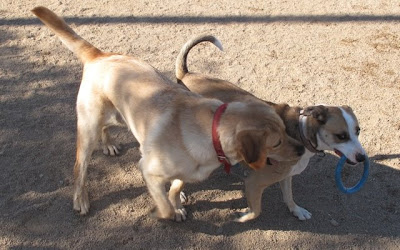 Sometimes we play tug-of-war. She is really strong! If you are ever in a tug-of-war contest at your company picnic, make sure you pick her to be on your side! 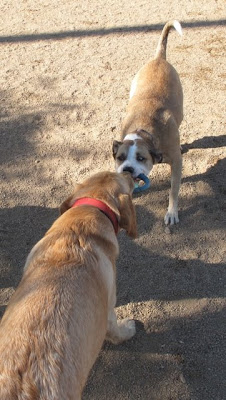 We are so good at tug-of-war that sometimes the other puppies come over to watch us play. I do hope there isn't any betting going on over who is going to win! 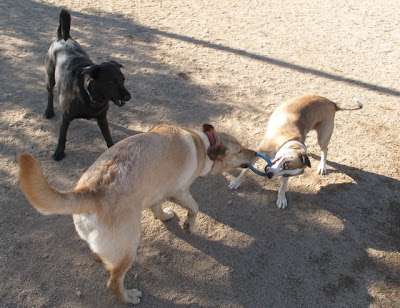 So now you see what fun you can have at the puppy park. Please tell your peoples to take you there if you have a puppy park in your town!
Posted by JacksDad at 3:01 AM