We Interrupt This Blog
To Bring You
A Very Important Announcement! 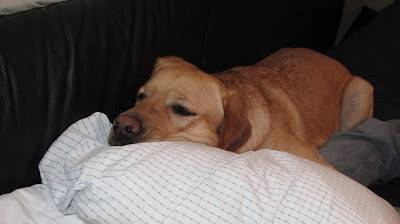 I did not even know that you could make noise come out of your butt!
An E flat I think!

We now return you to your regularly scheduled blog.

(Of course there's a note from the tall guy explaining this! -
As I might have mentioned before, Jack is no different from most puppies in that he sometimes on occasion has G A S. Usually when he's sleeping with his back end aimed directly at my head. At 3AM. I now know where the term 'wake the dead' comes from.
However, yesterday, as we were watching the Olympics, Jack just decides to (how can I put this delicately) 'let one rip'! The most shocked look I have ever seen on his face appeared and he looked around as if to wonder "What in the HECK was that?". This from a dog who doesn't flinch at thunder. And it wasn't even major - it was more like a toot! But it was one of the funniest things I've seen him do in quite a while.

And now I've been reduced to writing about a puppy flatulence. Oh well.
If you're really interested in the subject, here's one guy you should definitely know about: Le Pétomane).