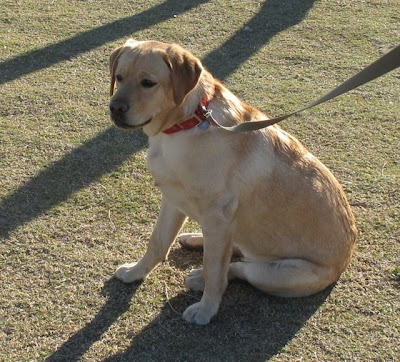 When we go out to the park, there are all these peoples out in the field running around and yelling like crazy! They are all chasing after this cowegg that one of the peoples has hit with a stick. After someone hits the cowegg with the stick, they throw down the stick and start running, while all the big peoples stand around and yell. Some of them yell stuff like 'Run to first' and 'Way to go' and some of them yell 'Get the ball' and 'Throw it to home'. Then, after the peoples out in the field finally GET the cowegg, they throw it around for a while. They keep doing this for a long time. Every now and again, a bunch of people will run to sit down and another bunch of people will come out and throw the cowegg around.

I asked the tall guy what they are doing and he said they are playing 'baseball'. I told him they should let me play because I can run and get the cowegg really good. He said that I would end up eating the stick they use to hit the cowegg. He's probably right.
Posted by JacksDad at 3:01 AM