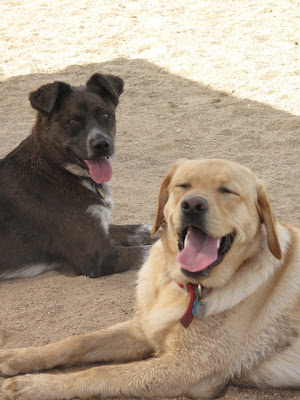 This is Armand and me after we have been playing at the puppy park! You can tell we've been playing because I'm covered in dirt. Armand is a good guy, although lately he's started trying to climb up on the some of the other puppies. I don't have any idea what that is about! The tall guy said he'd explain it to me when I get a little older.

Today was a really good day, all the guys I play with (Armand, Balou and Lambeau) were at the park at the same time, so it was just a free-for-all. One of the other tall people said that all the puppies were just lying around until I came, so I must be a good influence! We have to go to the park pretty early in the morning, so it won't be too hot to run and play. I think the tall guy would rather stay in bed, but I remind him that it's more fun to be outside playing than in bed sleeping. Besides, I don't think you're supposed to sleep after the sun comes up anyway....
Posted by JacksDad at 3:01 AM