I am not blogging today... 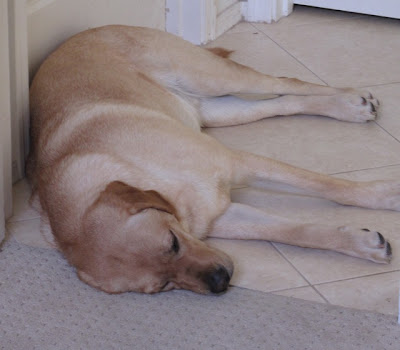 cause I am pooped!
The tall guy took me to the park this morning (not the puppy park, just the close by park) AFTER we had already had our morning 29 mile walk! (Well, it feels like 29 miles to me.) On our 29 mile walk, we went to the place with the squirty water and I got all misty (literally). That made me so happy, I had to run around for like 18 hours! (The tall guy even took off my string because there weren't any other peoples or puppies around.) FREEDOM!

Then we came home and he looked at his computer while I stared at him with my laser eyes (and accidentally scratched the leather chair a few dozen times) until he decided that maybe we DID need to go to the close-by park. Lo and behold! There wasn't anyone at that park either, SO, the tall guy said that since I was getting to be a big 1 year old boy, he could trust me for a little bit and he TOOK OFF MY STRING AGAIN! RUN FREEDOM RUN!!

The tall guy said that I am getting pretty good about not running too far away from him and LO AND BEHOLD (see above), we found not just 1, but 2 cow eggs (TG: baseballs). I have seen some puppies that can put like 3 or 4 of those fuzzy yellow balls in their mouth, but I can only carry one at a time, so the tall guy carried the other one. For some reason, he decided to throw his cow egg way far away, so after I looked at him like he was crazy (you should NEVER throw away a cow egg), I took off after it. Then I was in a dilemma! I couldn't get the one he threw while I was carrying mine, so I decided to drop mine and pick his up and take it back to him. Well wouldn't you know it, he decided to throw it away again! Being the good puppy that I am, I ran to get it YET AGAIN. After we did this about 3 or 4 times, I told him that if he wanted to throw it, he could just go get it, because I had mine, so there! He went and got his and I got mine and we took them both to the car. Now we have two cow eggs we can play with next time we go to the park (provided that SOMEONE doesn't decide to throw his away again!).

Now you can see why I'm not blogging today. I'm just too tired!
Posted by JacksDad at 12:10 AM