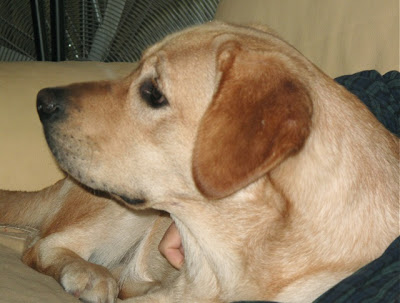 Does your person let you watch the TVs? The tall guy doesn't mind if I do, especially if it is a show about puppies. He thinks it's funny the way I try to figure out what is happening. BUT, he will not let me use the remote. (It may be because I tried to eat it one time when he was gone to the store. Or it may be that he's a remote hog.)

We were watching Unleashed: A Dog-umentary the other day and about halfway thru, the tall guy turned it off. It is mostly about some puppies in California who have a puppy parade each year. They get to wear costumes and everything. That part was really good. But then, there are a lot of really sad parts in it, so we had to stop watching it. I don't like it when the tall guy gets sad. I can fix that! I've learned that he REALLY doesn't like it when I lick his ear, so I did it and he forgets that he is sad. He also forgets that he tastes good, so I have to lick him to remind him!

So next time you're sitting home alone when your peoples have gone to the store, turn on the TVs. It's the big button that says "NO" on the remote. They will be really surprised when they get home! (Just make sure you're not on Channel 599!)