Now where have I seen this before? 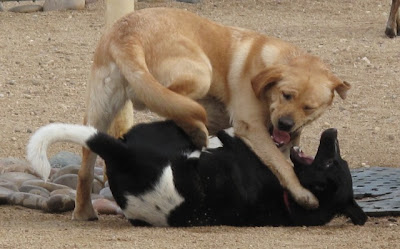 I'm telling you, sometimes you just have to show Joan Collins, er..... Freddy that he can't have Blake, er.... that he should not bother you while you're trying to get a drink of water!
(Note from the tall guy: Actually they were both just rolling around in the muddy water next to the drinking area at the dog park. Linda and Joan, er..... Jack and Freddy were just playing. Why they were playing IN the water, I do not know.)
Posted by JacksDad at 12:10 AM